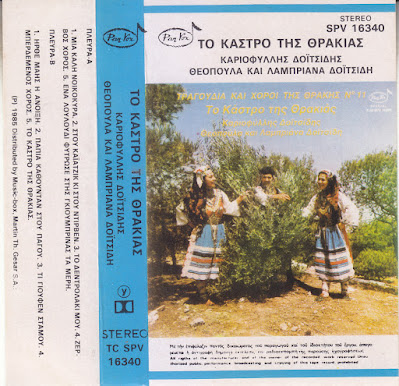 THE CASTLE OF THRACE

This tape is part of the collection ''Songs and dances from Thrace n°11'' here performed by a group lead by K. Dhoïstidhis who is credited with the entire programme (lyrics and music); of course  the repertoire is in fact traditional in its aspect. The Dhoïtsidhis are a well known musical family with Kariofyllis (vocal and outi) and his two daughters (vocals). They come from the village of Karoti near the Turkish border; the whole region lies between Bulgaria and Turkey and is called ''to kastro''. I supposed that the title of this tape and the last song refer to that area.
The instruments used here are clarinet, violin kanun, outi and toubeleki. 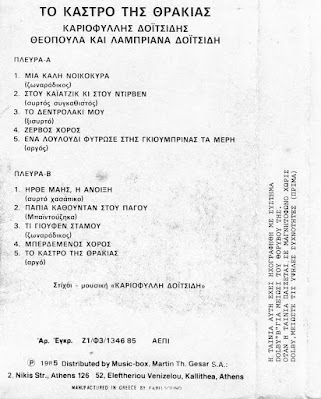 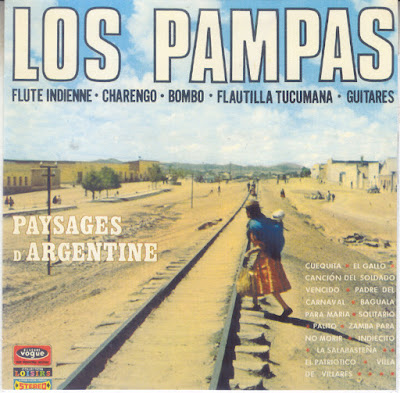 This is the first album out of two recorded by this excellent band of Argentinian musicians. Interestingly it was issued in France on a French label (as well as the second album). France was very much attracted to Latin American music generally speaking at that time and had been since the fifties; a lot a groups toured in France and Western Europe like Los Guaranis and Los Machucambos then later Los Incas, Los Calchakis, ... Los Pampas was led by Carlos Benn-Pott the kena player (also a member of Los Incas); he composed some of the tunes present on this album. Raul Maldonado on guitar and vocals was also an important musician for the diffusion of Argentinian music in Europe.
The repertoire is made of traditional dances and songs : chacarera, zamba, escondido, bailecito, cueca etc... The two zambas sung here are quite good and moving.
Argentina is a vast country with all sorts of musics, the tango being the most famous. Here Los Pampas play what I would call ''neo-folklore'' with tunes and songs originating partly from the Inca Empire and pieces from the pampa. Los Pampas were a band of nomadic people from various ethnic origins hence the name of that region in Argentina used by the Spanish afterwards.
Text in French. 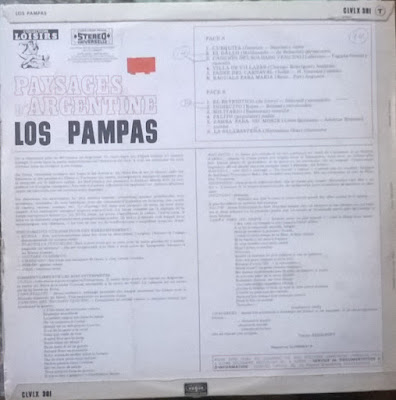 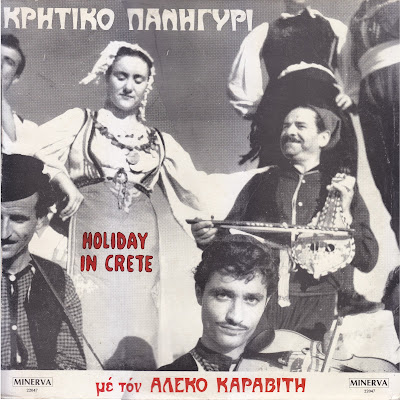 HOLIDAY IN CRETE with ALEKOS KARAVITIS

A. Karavitis (1904-1975) was born in the area of Rethymnon in Crete that was still part of the Ottoman empire. He started on the lyra as a child and then moved to Athens when he was 24 years old with his wife. He toured in Germany, Britain, France, Egypt ... with his own band. He became quite famous among Cretan lyra players. This album was released after his death; he performed with a small band  (the Traditional Cretan Group) with one laouto player and two female singers whose names are not mentionned. This is therefore authentic traditional music with the presence of those two singers who give a different sound to what I usually know as Cretan music. 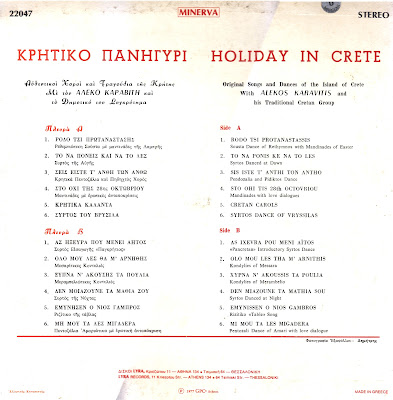 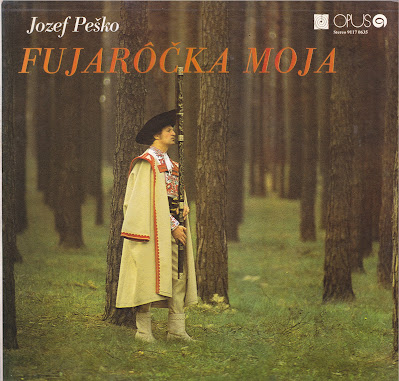 This is a typical album issued in the seventies from a country part of the Eastern bloc. Czekoslovakia like Romania or Hungary during the Communist period followed the USSR in their cultural policy and issued tons of LPs about national or regional folk orchestras.
Traditional peasant music and dances had already become folklore  before World War II but it was the rule after 1945 to offer the public a new kind of folklore based on traditional material but re-elaborated by composers from the classical music circle.  However under the classical varnish it is possible sometimes to hear something more authentic. Here Peshko plays several types of flutes including the emblematic fujara seen on the cover. He met traditional musicians and instrument makers  everywhere in Slovakia in order to learn how to play these flutes and respect local ways of playing.
Peshko is accompanied by the Folk Orchestra of the Czekoslovak Radio in Bratislava.
Playback was used on some tracks where he plays several flutes (track A1 with three fujaras for example).
Text in Slovak, German and English about Peshko's full career.